Despite its Flaws, Star Wars Battlefront II Takes you to Another Galaxy

Star Wars Battlefront II is an open world and multiplayer game that covers all the current eras of the Star Wars universe made by the company of EA. The multiplayer has over twenty maps to choose from that date from all the way back in the clone wars as well as up to the First Order.

You can be on a team with the clones, droids, rebels, Empire, or the first order. If you are a valuable player on your team and are having a dominating performance, you’ll have the opportunity to play as one of the heroes. The heroes depend on what team you are playing for.

For example, if you’re on a team with the droids, then you can play as Darth Maul, Count Dooku, or even Jango Fett. Another example, for the Empire, would be Darth Vader, the Emperor, or Boba Fett. These are just a couple of the heroes that can be played depending on the team being played. 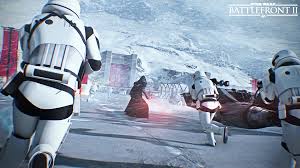 People can even choose to use one of the aircraft and deal damage from above. There will be constant air battles happening at all times, as well the battle taking place on the ground. The game also features a single player story mode that is centered around the First Order.

of Starkiller Base. You find ways of rebuilding the First Order, taking on countless missions to obtain this objective. The single player puts the player in the perspective of the troopers instead of the jedi or main characters.

This game has done a lot of things well, starting off with the content. This game is a huge improvement from the first one due to the fact that it actually has a story mode and has more features in its multiplayer.

In the first game, players could obtain heroes randomly, even if they were not performing at a high level for their team. In this game, you have to play well enough beforehand to play as a hero. Weapons and blasters seem very balanced in this game and nothing yet seems overpowered or overused by the player.

Another good feature that this game has included is instant action. Here, you can play against the computer instead of actual players. The player can choose the difficulty as well as any map in the game as well. This was highly requested from the fans in the

previous game and is a good thing that EA has carried out their wishes.

As much potential as this game has, it does have one critical flaw that could absolutely destroy this game’s potential. That flaw being the level progression system. This needs improvement, seeing as to how you don’t really have to play the game to obtain items.

There is something in this game called star card packs that can be purchased. People can just pay money to obtain all of these things instead of playing the game. This isn’t the worst part though. You can play the game to earn credits to buy these packs, but the huge issue here is that everybody earns the same amount of credits on a team.

I could be the worst performer on the team and still earn just as many credits as the player who finished in first place. Therefore the most valuable player in the lobby isn’t receiving anything close to what he or she deserves. This is a critical flaw by the developers and must be fixed as soon as possible.

Multiple people who have reviewed this videogame have also put a critical emphasis on the level progression system and that it must be improved on. EA is aware of this issue and are currently working on a solution.

My final review for this game is 7.5/10. This game has great replay value and gameplay as well as the story mode. This would be the most complete video game ever made, if only the level progression system wasn’t so incomplete. The fact that players who aren’t skilled at the game can receive the same amount or more credits than the players with skill needs to be fixed as soon as possible.