Bacteria and Their Sworn Enemies

Why we should be thankful for the deadliest viruses on Earth 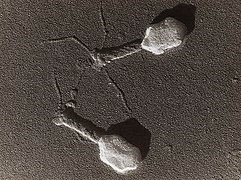 Humans, by nature, are innovators. Since the beginning of modern times, we have defied nature. Evolution was too slow for us, so we developed tools. From those tools, we developed more. Human innovation has become exponential. As we improve technology, the rate of our growth has increased. Time and time again, we’ve set ourselves apart from other species. But can we continue to rule nature?

The recent evolution of super bugs has been distressing to some. Antibiotics, drugs that shattered the power simple bacteria had over humans before the mid 1900s, have been challenged. By natural selection, quickly multiplying germs have evolved to resist different antibiotics. There are 2.8 million yearly cases of bacterial infections by antibiotic resistant bacteria in the US, and this number is growing. 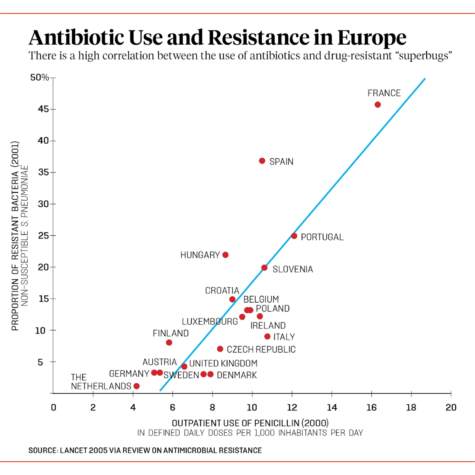 Above is a graph of the correlation between antibiotic use and the proportion of resistant bacteria in the country. The key thing to know about antibiotic resistance is that it is accelerated by unnecessary overuse of antibiotics.

From where did this new challenge appear? Evolution, by the method of natural selection, causes populations to develop new, advantageous traits. Natural selection tells us that organisms that are better adapted to their environment will be more likely to reproduce and pass on their advantageous traits. If a bacterium mutates a trait that increases its resistance to an antibiotic, it is more likely to survive and reproduce more in hosts like us, passing on its resistance trait. Bacteria that might not have even required antibiotics to treat previously have developed resistance in the presence of those antibiotics, increasing the threat they pose. Bacteria’s quick evolution can be attributed to their high reproduction rate. They double every 4 to 20 minutes, which means there are a lot more opportunities for mutation (and therefore adaptation) than organisms like ourselves.

It’s important to remember that bacteria are not alone in their ability to evolve. Bacteria have been at war with their own infective agents, bacteriophages, for billions of years. Bacteriophages, or phages, are viruses that are harmless to humans, and instead infect and replicate within specific bacteria. Bacteria and their sworn enemies have both been evolving. While bacteria evolves in ways to defend itself against its phages, phages evolve to become stronger against bacteria. Even now, the estimated 10³¹ phages in the world are waging the deadliest war on Earth against our common enemy, killing up to 40% of all bacteria in the ocean on a daily basis.

Why does this matter to us? Bacteriophages have been used in a process called “phage therapy” to treat bacteria since the early 1900s, although our interest in using these deadly creatures has seen a recent increase. When the corresponding bacteriophage is injected into a patient, it will eliminate the bacteria it specializes for only, posing no harm to other (possibly beneficial) bacteria or our own cells. If antibiotics don’t seem to be working on a patient, using phages is an alternative treatment.

But… didn’t we just establish that bacteria evolve to fight phages as well? It’s true that bacteria can even develop powerful resistance to their corresponding bacteriophages, but a promising discovery has been made to counteract what’s otherwise a depressing reality. In at least some cases, bacteria may have to give up their bacteriophage resistances to become stronger against antibiotics. A recent clinical trial on a patient with no other hope left demonstrated the viability of using both antibiotics and phage therapy against resistant bacteria.

The patient with a Pseudomonas aeruginosa infection in their chest cavity was saved by the experimental treatment. Thousands of bacteriophages, together with antibiotics that P. aeruginosa is otherwise resistant to, were injected directly into the area of infection. The infection disappeared within just a few weeks. Evolutionary trade-offs occurred in the bacteria that caused them to lose their resistance to the antibiotics. If they develop resistance to the phages, their antibiotic resistance would suffer.

The treatment successfully showed the synergy between bacteriophages and antibiotics, but research on the matter is not yet abundant, the treatment is experimental, and there is no official approval yet. Regardless, the case was a reminder that there are promising avenues for treatment in the future. Phages are rightfully getting more attention in the medical world, and a new source of hope has arisen.

With bombardments from news sites about our failures, ranging from local crimes to the worldwide COVID-19 pandemic, and even climate change, it’s important to stay aware of the positives. Humans are naturally predisposed to focusing on negative news. Like we’ve shown the ability to do time and time again, we must learn to overcome our nature to better the quality of our lives.