Say “No!” to the Electoral College 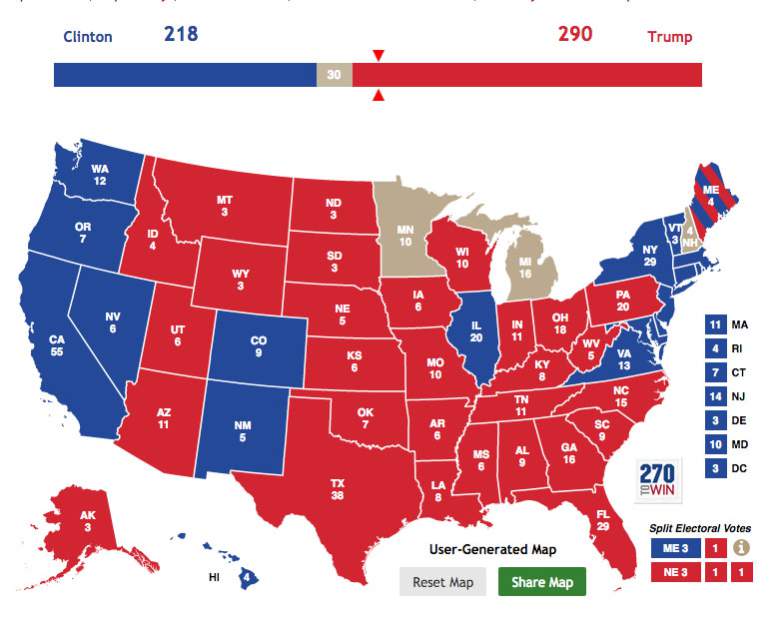 The current Electoral College system that controls our elections is out of date and needs to be changed. It discourages a third-party system and causes lots of people’s votes to be easily swayed by a few people’s opinions. In the past, there has been multiple instances where the Electoral College votes support one candidate, while the popular vote supports the opposing candidate. This causes someone to be elected as president whom the majority of the people do not want. This system was made to create equal representation, but instead is resulting in unfair and incorrect representation. It is giving the representatives of our states too much power over our votes, and it needs to change.

One of the reasons that the Electoral College should be changed is that it discourages a three-party system. By doing so, they are, for the most part, forcing the presidential candidates to choose either the democratic or republican party. This system is referenced by describing that, “the Electoral College reinforces a two-party system, discourages third-party of independent candidates, and thereby tends to restrict choices available to the electorate,” (pg. 4). If those candidates do not choose between those two parties, the possibility is slim to none for the candidate to be elected to office. Throughout the 229 years we have had a presidential system, the instance of an Independent candidate being elected has never occured. It is rare for them to even win a single state, though that has happened before. By discouraging a three-party system, it gives independent candidates an unequal chance to win in some ways, as they do not have the representation of the popular vote being counted fairly. This can be bad for not just the person running for office, but also the government and the whole nation. The person running could be the right person for the job, be what the country needs to change certain policies, and make a difference in the nation. The Electoral College would be, for the most part, preventing that person from winning, which is unfair to them and the people who want them to win.

Another reason why the Electoral College needs to be changed is that it allows the votes for president to be easily swayed by a few people’s opinions; their state’s electors. The electors get to vote on who they personally want to be president and their votes are the actual votes that decide who will win. For an example, if the popular votes were close between two candidates, the state representatives can choose which way he/she wants the votes to go. There is nothing that says that the state electors have to vote with the majority of the votes from the state citizens. Referenced again, it is discussed that, “one candidate could throw his electoral votes to the support of another.” (pg. 3). This means that one person’s opinion can decide where thousands of people’s votes go. In the state of Massachusetts, there is a population of about 6.9 million people, and it has 11 electoral votes. That means that one elector is in charge of over 627,272 people’s votes. One person is in charge of over six hundred-thousand votes in Massachusetts. By combining all of the states’ electoral votes they are the ones who are deciding where a state’s votes would go, either to the Democratic or Republican party. Eleven people get to decide who 6.9 million people are voting for. Some members of the Electoral College are referred to as, “‘faithless Elector(s)’”… “who pledged to vote for his party’s candidate for president but, nonetheless votes for another candidate.” (pg. 3). Even though state electors were voted upon by the citizens of the state, it does not mean that they will be truthful in their duties. It also shows that it does not mean that people agree with all their opinions and it definitely doesn’t mean that the entirety of the state’s population agrees with having them choose where the people’s votes will go, in general. This can cause the state’s votes to go the way that most people don’t want it to go, and can cause the election to be won by a candidate, not favored by the citizens. This has happened multiple times in history, even in the last election, where the Electoral vote went in favor of the opposite person then the popular vote. The Electoral vote allows hundreds of thousands of people’s votes to go in one direction, based off one person’s opinion.

The Electoral College has created the stigma and mentality: “why bother”. Over the years it had become less and less exciting to become 18, to become the age where you can finally vote. People have begun to see voting as less of a right, and more of a force. Less people have been voting, because of the Electoral College. It is our right to vote and we should be honoring that right by voting in every election possible. The Electoral College results in creating states that republicans and democrats can count on. This means, that states like Massachusetts usually vote for the Democratic candidate, so the party can ‘count’ on their votes. By having this in place, less people feel they have the need to go out and vote, because either the state votes usually goes the way they always have or they feel as though their vote will not make a difference, because of that. In reality, that statement is partially true. Since the electors have so much power over people’s votes, their one vote is not going to count for much against the electors, and they, in the end get to choose where the vote will go. However, on the ballot questions, people’s votes are important, and it is important for them to go out and get their opinions heard. By having the Electoral College in place, people are less likely to go out and vote, because their votes are not as “important” with it there. This needs to be changed, because people should feel the need to go out and vote on who their president will be and they should be the ones deciding. It should not only up to 538 people when there is 326,766,748 in the United States. We should be the ones deciding who runs our country and everyone should get the chance to do that.

By having the electoral college in place, the majority of the population’s opinion can be ignored and what they all voted towards cannot happen, all based off what their state electors think. The Electoral College results in the possibility of the majority of the population’s opinions being ignored, candidates in third-parties not getting an equal chance to win, and creates the “why bother” voting mentality. This needs to change; the only way to do this is by getting rid of or amending this out of date system into something new.