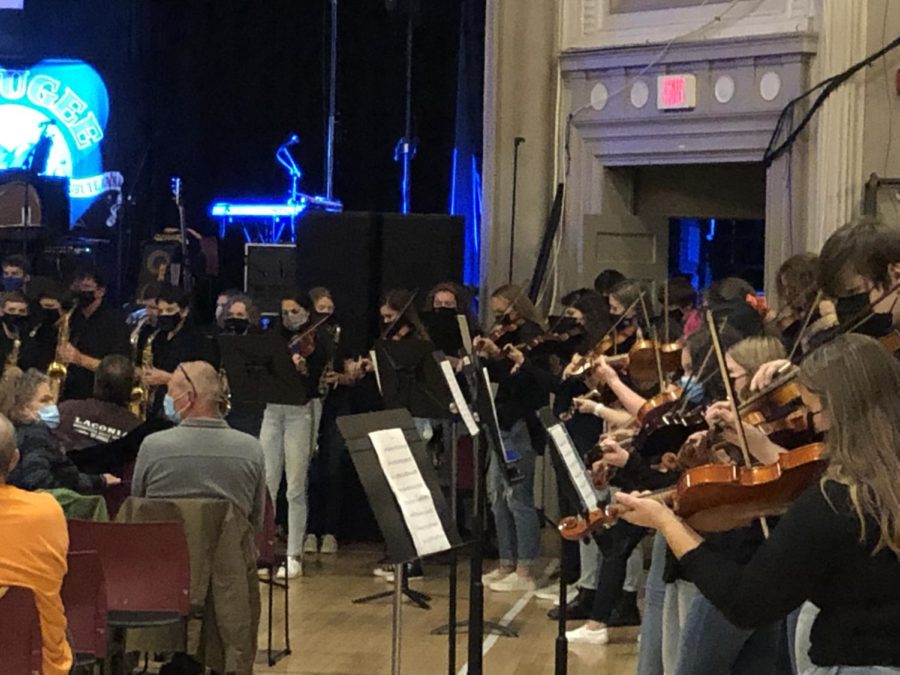 Plymouth North and South Music departments held an event alongside Refugee, Tom Petty & The Heartbreakers Tribute Band, at Plymouth Memorial Hall on October 29th at 7:30p.m. This fundraiser’s proceeds went towards the high schools’ music departments and marks a great step towards getting back to the way things should be. What better way to bring everyone together than with music from one of the most influential groups of rock music?

Tom Petty & The Heartbreakers were a band that originated in 1976 and is known for their unique sound and Southern charm. Many were devastated when lead member, Tom Petty, passed away, and love to remember him by honoring his music. The tribute band, Refugee, started in 2014, out of the six members’ love for the band. Refugee grew very successful over the years and it is one of the most successful tribute bands, touring nationally.

Since lockdown, the music departments have suffered a financial loss and most importantly, the ability to perform for the community. The connection of music and the community was greatly lost during the period of isolation and the departments are looking for their way back. The students of the Plymouth North and South music departments are joining the iconic tribute band to help fundraise and raise awareness for the young performers again. Coralyn Grueb, Director of Plymouth South’s Band and Orchestra, has expressed how she loves this idea of fundraising, additionally commenting: “We have done a concert like this twice in the past and have had some success both times. The most successful fundraiser concert that we have run was two years ago with Foreigner’s Journey as the headliner. This year’s concert was also a success considering we had the Nor’easter that knocked power out and are also in the middle of a pandemic. We had a great turnout for the event considering those two factors.” The feelings of adrenaline and joy have surged once again with this wonderful night full of music and remembrance.

This event gave students the opportunity to finally do what they love: enjoy and perform music again. Most events or performances within the music community have been only one-sided and through a screen for nearly two years. Many have even only experienced the online version of creating. Jason Luciana, Director of the Plymouth South Vocal Department and Theatre Guild says: “Some of our students haven’t performed for a live audience in over 18 months. Any performance opportunity – no matter how big or small – is another chance to teach our students the value of connecting with an audience through live performance.” Finally, we have been able to restore this connection and with more and more nights like this, the closer and stronger this connection will build.

And what a night it was! The band and orchestra started off with a strong opening, showing off with their own set to build excitement and anticipation for the audience. Performing songs such as The Weeknd’s “Blinding Lights” and Camila Cabello’s “Havana”, the young musicians return strongly. Refugee started off with a strong opening- Tom Petty and the Heartbreakers’ classic “Don’t Do Me Like That” and from there played all the songs we know and love from the iconic band. The tribute band brought a strong delivery, down to the physical appearance of the group initiating a time machine back to those days for many. After a brief intermission, students from the vocal departments joined the band to sing some songs, including a well known favorite of all, “Free Fallin’”. The night was full of music and dancing all around and an overall success, estimated to have raised around 5,000 dollars. Here is to many more of these nights where everyone can come together with the joys of music.