The recently-released ten minute version of the hit song is a 'mosaic full of happiness, romance, angst, and devastation." No wonder why it's leaving such an impact...

Taylor Swift has outdone herself again, breaking the nation with her ten minute version of “All Too Well” on her recent release of Red (Taylor’s Version). Full of 30 songs, Swift has described the album Red as an album of a heartbroken person and their scattered mosaic full of happiness, romance, angst and devastation. All Too Well has been described as not only a fan favorite but also a favorite of Taylor Swift herself. The song is particularly vulnerable and lyrically masterful, detailing a remembrance of a powerful unique relationship that came to a close. Though the originally released version is impactful and emotional- that wasn’t even the half of it (literally). Long time fans and even new coming fans have been blown away by the power pertaining to this new anthem.

Let’s dive into analyzing this song. What exactly makes it so groundbreaking? Instrumentally, the chord progression remains consistent and a good drum beat to back it up and keep a strong driving force to the lengthy song. It’s simplicity and fairly low sound makes it all the more emotional as it forces the listener to focus on the lyrics.

Lyrically, it could be argued that this piece is one of the best songwriting examples out there. There are many literary elements involved, including imagery, similes, symbolism, metaphors, repetition and even more. Storytelling has been a known talent of Taylor Swift, as she has said herself that she wouldn’t be where she is today without her own lyrics and ability to convey a story. The song begins with “I walked through the door with you / the air was cold / but something ‘bout it felt like home somehow.” This line immediately places you into the contrast of the cold and warmth, enveloping home. Right after that, she mentions a scarf that she left there. Continuing, she paints a new scene of driving down a street, using phrases “autumn leaves falling down like pieces into place” and “your sweet disposition, and my wide eyed gaze” to set the stage. She uses the comparison of leaves falling down and a puzzle to entail that everything felt perfect and meant to be. Describing the characters’ body languages illustrates the relationship dynamics. She is pictured as innocent and he is intentionally coming across as endearing and charming. She then reminisces and admits she knows that was a while ago and “that magic’s not here no more”, implying that the relationship spark was powerful. 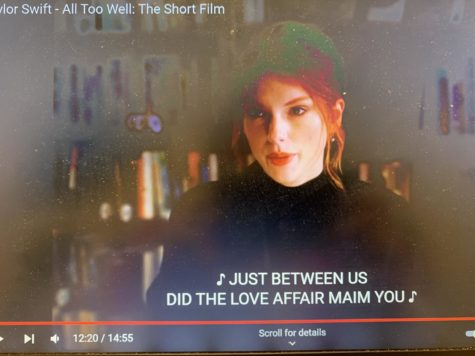 The chorus comes in, further reminiscing, saying “there we are again on that little town street” and closing with “I remember it all too well.” This phrase is repeated throughout, emphasizing the significance of this relationship and how much it continuously impacts her. The next verse commences, once again painting a picture at what can be interpreted as the house mentioned in the beginning. His mother is gushing about her son much to his embarrassment, telling stories involving childhood and showing various pictures and vulnerabilities of that time in his life. Meeting parents often signifies the seriousness of a relationship. Swift then continues with “You taught me ‘bout your past / thinkin’ your future was me.” Therefore, this confirms how things were headed in a good direction but is used in the past tense.

This is where the excitement truly begins: the new parts that listeners have not experienced beforehand. She flashes back to the scene of driving upstate together, when he is tossing her the car keys. Vividly, she says “we were always skipping town / And I was thinking on the drive down / Any time now, he’s gonna say it’s love / You never called it what it was.” This makes the listener speculate that he was avoidant and not one to say what was in front of him. Skipping town could imply him not wanting to be seen with her and further avoiding any establishment of their title. Then, it is said when the relationship ended was when he admitted they had something. Swift uses a beautiful analogy of their relationship being compared to a life: “Til we were dead and gone and buried / Check the pulse and come back swearing it’s the same / After three months in the grave.” This is how he never called it love until later, signifying he potentially went back to her swearing nothing was different between them even after such a big heartbreak to her. Then, the next line, she says “And then you wondered where it went to as I reached for you / But all I felt was shame and you held my lifeless frame.” This further signifies that it potentially meant more to her emotionally than him and that relevant shame drained her livelihood, bringing back the earlier theme of life.

Another chorus turns the corner, picturing the couple dancing around the kitchen together late at night. These various moments and scenes are used to emphasize the bliss and pure joyful moments within the relationship to further emphasize the extreme contrast of the beginning and the end. Once again, a theme of shame is picked up and the miscommunication between them as Swift sings “You kept me like a secret but I kept you like an oath.” She saw this relationship as a way of life, while he deemed her to be only a mere part of his life.

The bridge makes a rising climax and she seems to be tossing around various reasons as to why the relationship ended. “Maybe we got lost in translation / Maybe I asked for too much / But maybe this thing was a masterpiece ‘til you tore it all up.” In her mind, she could have asked for too much, but realistically they could have tried to understand each other instead of destroying the relationship that was uniquely powerful, being the best it could ever be. Once again, she brings in another simile, saying “And you call me up again just to break me like a promise” saying he instills false hope only to crush it up, like you would a paper that you made a mistake on, which she later compares herself to.

Surprising fans more, the bridge continues on further, starting with an allusion to Shakespeare and then contradicting it: “They say all’s well that ends well, but I’m in a new hell everytime / You double-cross my mind.” This phrase is with acceptance of the bad and that you wouldn’t be where you are without all the pain, to which she denies by saying how she can’t ignore the negativities. It then is revealed that he thought they were too far apart in age, then she further questions his image of her. This ties back into the miscommunications and how even the way they saw each other was different alongside their dynamic as a whole. With evident anger she retorts “the idea you had of me, who was she? A never-needy ever, lovely jewel whose shine reflects on you.” Powerfully phrased, many can relate to being in any kind of relationship with someone who ultimately wishes for a pristine image and disregarding their emotions.

Swift continues further with even more contrasts to the height of their relationship versus the end. From here, she ties back the symbol in the very beginning of the song: the scarf. “But you keep my old scarf from that very first week /  Cause it reminds you of innocence and it smells like me / You can’t get rid of it cause you remember it all too well.” It can be inferred from this section of the song that he was fully aware of his impact on her during the relationship and how innocent she was. Despite this side of him, she thinks he knew deep down they had something real with each other but ignored it. She further ties it together with “Back before you lost the one real thing you’ve ever known” fully realizing that they shared something that they never truly had before. Using references and repetition to show her reassuring herself that it all did happen. “Wind in my hair, you were there, you remember it all / Down the stairs, you were there, you remember it all / It was rare, I was there, I remember it all too well.” This fully encapsulates the memories flooding in and how she is insistent he must feel the same since he too experienced these moments.

Now, it gets even more exciting! She surprises listeners with another bridge- this time slow and thoughtful. She goes on with an ironic twist saying “I was never good at telling jokes, but the punchline goes / ‘I’ll get older but your lovers stay my age’” to be mocking and frame a realization. This would be that he would never grow out of his ways and she will continue to grow more maturely. She continues with more on how he devastated her, detailing “From when your Brooklyn broke my skin and bones.” This can be presumed as his hometown; where he was raised and how he came to be. The common phrase “you are where you’re from” furthermore connects that who he is broke her down to the core.

Then, Swift goes on to write, in my opinion, one of the most poetically articulate and gorgeous lines of all time: “And did the twin flame bruise paint you blue?” This ingenious line has severe depth to it. ‘Twin flames’ is a term used in astrology to describe a true connection between two people that is stronger than a soulmate. Not only that, ‘twin flame’ is also a relation to the album opener, State of Grace (Taylor’s Version), which has a line about twin fire signs. So, that being said, bruises are terms for pain and visible proof of damage. On top of that, the color blue is often used as the image of sad and depressing emotions. Put that all together and you get this question: Did our pain from our powerful love make you heartbroken? One of the most creative and eloquent lyrics that encapsulates such strong emotions. She continues with more allegories, using a snowy city. “Cause in this city’s barren cold, I still remember the first fall of snow / And how it glistened as it fell.” This depicts how even the harshest of situations can be wonderful and have it’s joyful beginnings. In the end, you only see the pretty scenery, not the frigid bitterness seeping into your bones. From there, the song slowly progresses to an end, using repetition once again with all of the tags of each chorus, once again, showing her self-reassurance.

It is safe to say that there is a lot to unpack here when it comes to this song. Listeners can find so many various ways to interpret this song since we all experience things differently. That being said, there is no denial that this is a work of true musical art with piles of detail. Even those who have not listened to Taylor Swift have found themselves listening and watching the All Too Well Short Film.. If you haven’t listened to it, I implore you to do so as soon as humanly possible as it is poetic and a meaningful story brought to life. It has truly been a groundbreaking staple of the music industry.